Beto and Daniel are best friends. Daniel imagines how his day would be if he were a girl. Maybe this way his feelings toward Beto would be seen as normal.

Born in 1987, Mexico, Tavo’s Ruiz’ first short film “The Godmother” participated with success in several different film festivals around Mexico, including Morelia Film Festival. In 2009 he founded his own production company, Lights On Producciones. In 2017 his short film “Line 9” was part of OutFest L.A. and over 20 film festivals around the world, including the 2017 New Renaissance Film Festival in Amsterdam. Line 9 was pre-selected for the 2018 Oscars. Tavo currently lives in Germany, where he is developing a new feature film. Interview by Massimo Barbato, Creative Director, NRFF

1.       Congratulations Tavo! ‘Juan Gabriel is dead’ has won FILM OF THE WEEK, which recognises the quality of the film and your talent as a filmmaker. What motivated you to enter the New Renaissance Film Festival?

Thank you very much!. It’s an honour for us to be chosen as Film of the Week. I applied to the New Renaissance Film Festival last year with my previous work “LINE 9”, and I was lucky to get a Best LGBT Short Film nomination for it. I decided to go to Amsterdam for that first edition of the LGBT version of NRFF, and I had a blast. The festival was magnificent, full of great filmmakers from all over the world. That’s why I decided to apply once more with my new short film “Juan Gabriel is dead” for the 2018 edition, I just couldn’t let it pass, this is one of the top festivals to visit, and I am extremely happy that it is growing and growing. 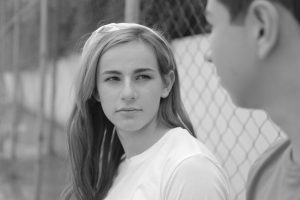 2.       Juan Gabriel is a sensitive portrayal of two teenage boys growing up in Mexico. Can you tell our festival audience about the story?

“Juan Gabriel is dead” is the story of Beto and Daniel, who are two best friends living in Mexico City and everything they did on the day the famous Mexican singer Juan Gabriel died, proving that their friendship could mean something more.

At the same time, I remember that when I was a teenager I started noticing my attraction to boys but that always made me feel really weird, especially at that age. So, I was often telling myself “what if I were a girl, maybe these feelings could be normal?” And with that, I thought I should create a story of that teenage boy who feels like he doesn’t belong. Maybe imagining himself being a girl would help him understand his feelings towards his best friend. And if enough people watch this story, especially teenagers who may relate in any case to this short film, they could try to be more understanding about the subject of being just different, and the importance of accepting others but accepting yourself too. 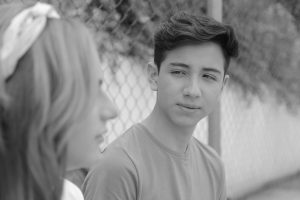 4.       How did you cast the two leads in the film? What preparations did the actors go through to deliver such a convincing performance?

Because I live in Germany and I planned to go to Mexico just for the shooting of the short film, we needed to go through an extensive casting process for the perfect couple in a limited time. We tried different combinations, but I always knew finding the right Daniel/Daniela would be the difficult part. Finally, after a few days of auditions, we found 17-year-old Ovidio Noval (nephew of the controversial Mexican singer Yuri). I saw something special in him, and I chose 16-year-old Giovanni Sandoval who I auditioned earlier that day. We tried them together to see if the chemistry between them worked, and they were fantastic.

Two days later, we did a make-up and costume rehearsal for Ovidio as the character, Daniela. We met constantly, but I am grateful to his acting coach Irvin Kraven who helped me with his voice change and his girly mannerisms by watching videos and imitating famous young girl celebrities together. The actors then rehearsed together. I am especially proud of Giovanni because this was his debut in front of the camera. The preparation was extreme for them both because they were not used to rehearsing in such a short space of time, but they nailed it. They deserve the praise that may hopefully come.

5.       Where was the film shot and how long was the shoot? What was the most challenging scene to film?

We shot in the film in the heart of Mexico City for two long days and because I am sentimental about my country, I wanted to create in a few scenes, this love letter to my lovely Mexico city. This is why we used two of the city’s most iconic locations: The Bellas Artes Palace, as a background when they are eating pizza in the street, and the top floor in the Latin American Tower with the panoramic view of the city. Both locations were full of people. These were the most difficult scenes to film because we couldn’t control the people from passing by and distracting the actors. Ovidio who was dressed as a girl felt very out of place and nervous. But after a few attempts, we succeeded and got the shots we wanted. 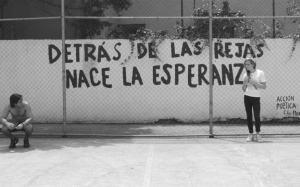 Prior to this film, I tended to describe my style as raw, with a focus on difficult emotions charged with sexual disruption. But for this film, I needed to explore a new type of filmmaking –  something more juvenile that could relate to young audiences, with a touch of artistry using beautiful black and white imagery. And that’s the beauty of being a filmmaker, in every attempt, you discover new things that go towards defining your style, little by little.

7.       You are based in Germany. How does it compare making films on two different continents?

I guess the most difficult part so far has been finding the right people to collaborate with to make films, especially in Germany. For me, it is much easier to build a team when I am in Mexico. I have my main crew who have also been my friends for many years. We trust each other, and that’s why I’m so thankful to each one of them. They wanted to work with me, trusting my talent. I owe everything to my executive producer Andrés Borja, my producer Cecilia Miva who joined our team on “Line 9” my previous film; but most important of all, my cinematographer Sergio Mariscal who has this special vision that always relates to what I’m searching for through the camera lens. Finding a team like this in Germany has been the most difficult part. 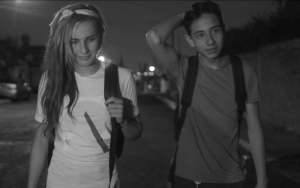 8.       Tell us about your recent experience at OutFest L.A. and what that meant to you.

OutFest L.A. was a blessing for me. We got the chance to show my short film at the Director’s Guild of America, in the heart of Hollywood itself. It was a dream come true. I’ve known about OutFest since I was 18, but I never tried to apply before because I didn’t feel ready. Finally, after the first 2 successful months of the festival runs with “Line 9” I decided to try it and we got in on our first attempt. This was so rewarding but especially validating for me. At the festival, I had the chance to meet so many great L.A. filmmakers, especially producers. I had a lot of fun and made some amazing contacts from all over the world. I expanded my network and the whole experience developed my confidence as a filmmaker. Soon after, I started working on “Juan Gabriel is dead”.

I will dedicate 2018 to hopefully promote and enjoy a successful festival run with “Juan Gabriel is dead”, but my main focus will be on bringing together two new projects – both feature films. One will be based in Mexico and another in Germany. It will be an exciting year. One of the projects needs a lot of resources (the Mexican one) but the other one is pretty much an extreme indie movie. The story will shock some audiences, especially German audiences which are not used to this kind of hard storytelling.

Finally, on behalf of my team, I want to thank NRFF once again for letting us share a little bit more of this tender film. We hope you get the chance to see it very soon.