MANUEL M. MERCIER is a young French film director who lives between Paris and New York. He has made a documentary trilogy devoted to individuals who are finding their way in life despite the limitations of a disabled body (“Philippe Croizon – Fallen from sky”), the dangers of getting lost in one’s own media reflection (“Gio Black Peter – New Fuck New York “) and finally, the loss of status by becoming a woman when born a man (“Olivia Chaumont – Olivia”). He loves multidimensional personalities who face challenging situations, and his passion is creating inspiration that the audience can apply to their own lives. Manuel has also created a series of films for the laser game “Virus Wars”  for which he  received the 2015 Gold Winner International Innovation Award  from UNESCO.  It is the subject of a World Health Organization publication, and he is currently in the starting blocks for the creation of a VR video game. With “In The Mirror” he has reached maturity as a director of fiction. 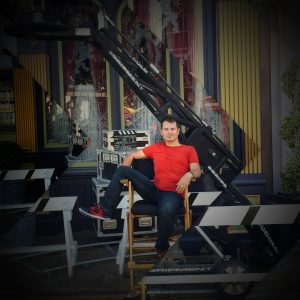 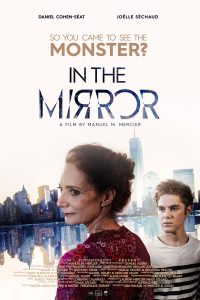 “In The Mirror ” Synopsis:

Joëlle is not your average father. Her life is in full reconstruction after a sex reassignment, when her son suddenly leaves the family home in Montreal and follows her to New York. She’s not ready to play the doting father. She can tell her son the contrary, he can see that she’s gone down a notch. Crap job, tiny flat. And there’s a transgender support group that meets there. She can’t take being constantly scrutinized, questioned and judged by every Tom, Dick and Harry. Her son’s arrival might just be the last straw. It is emotional swings and roundabouts which won’t leave you the same person.

1. Congratulations on winning the BEST OF FEST (LGBTQ) FILM AWARD at NRFF Amsterdam 2017. This award is given by our jury in recognition of outstanding storytelling, directing, acting and production. How was your festival experience? How does it feel to receive this award?

I’m very excited and honoured to receive the award for the Best LGBT Film of the New Renaissance Film Festival. It’s an achievement that belongs to the entire team. It is also recognition by the profession of our hard work and determination.

What was particularly enriching was Massimo, Jan and the whole team’s understanding of the creative experience. It was refreshing and important professionally to come into contact with other artists who share the same difficulties, doubts and joys as I. Few organizations understand how this motivates us filmmakers and boosts our morale after what has been long haul. 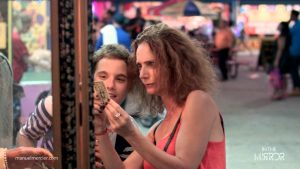 2. Describe the central characters in “In The Mirror” and their journey?

The main character of the film, Joelle lives her life after her reassignment no matter what the cost. The arrival of her son, Pierre, confronts her with deep emotional wounds. Pierre needs his father, his love is present but is he ready to accept Joelle’s change of identity? 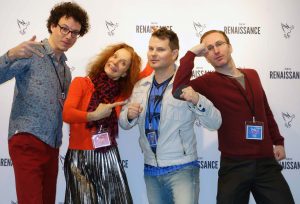 3. What was your inspiration for directing a film about a transgender woman?

After my personal experience of working on a documentary about a transgender woman, I really wanted to explore the family relationships of a transgender woman. The potential mirror effect between Father/Son is a situation that can happen in any family. I was intrigued by the very transparent and openness of my central character in her daily life living in New York, and her more hidden and discreet family life.

4. How did you find the central cast and prepare them for their roles?

I knew the principal actors, Daniel and Joelle, from the Jack Waltzer Actor’s Studio workshop  in Paris. I asked them to say yes to the film even before they had finished reading the script. I needed a leap of faith.

(Daniel Cohen Seat, NRFF Best Supporting Actor nominee): “For my part I concentrated on my working relationship with fellow actor Joelle and discovering her character. My character doesn’t know what to expect and I decided to construct memories of the father rather than anticipate my reactions to him changing”.

(Joëlle Sechaud, Best Actress Nominee for the 3rd time in a film fest): “Manuel put me in touch with Giovanna who is in charge of an auto support group for transgender women in Paris and I could ask her questions. I also watched different documentaries about Transgender people that Manuel advised me to watched and then chose a prototype, a transgender woman who inspired me. I did some personal work on the character to discover her behaviour, and I also worked on the relationship with Pierre (the character’s son) and how important it was to be herself  and to be recognized for who she is”. 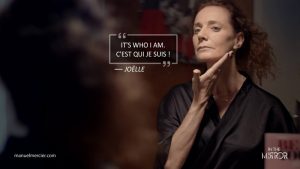 5. Is there a scene in the film that you found challenging to shoot?

Filming in New York is a challenge. I also felt a deep responsibility for getting the subject just right, and to honour the people it represented. Many of the scenes between the actors had a very emotional effect on me. The confrontation between the two main characters in front of the son’s school I found particularly disturbing. It was something very intimate and personal.

6. How did you raise the finance for the film?

The film was financed by private sponsors.  I did my best to live up to the trust they put in me.

7. As the director, did you learn anything new from making ‘In The Mirror’?

I was a chief editor for television but since I directed “In The Mirror”, my first fiction film, I have realized that directing fiction is by far my most favourite thing in the whole world – including sex and lemon sherbert 😊.

8. Have you always wanted to be a filmmaker?

As a child I  would play act and shoot scenes with my toys. I cannot stop myself from observing, and questioning the intimacy between people. 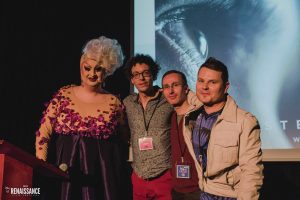 9. Was there a film that inspired your ambition?

Many. If you ask me to mention one film only then it would be David Lynch’s “Elephant Man” for its sheer power of emotion. It’s a film that overwhelms me. I learnt that one can identify and connect emotionally with someone that has completely nothing to do with your own life. It’s the power of storytelling.

10. What is the hardest thing about being a director and directing a film?

When I prepare for a film I tend to become obsessed with all and everything about the film. But through this process, the obsession brings on a degree of tiredness and finally I have to let go. But at the moment the experience becomes the most creative everything becomes possible.

11. What do you want people to gain from watching “In The Mirror”?

I would like people to leave a place for others, setting aside all judgment and opening up to the experience of their life. We are all here together on this beautiful planet sharing our human experience.

12. Where can people go online to find out more about the film?

A longer film and with a little luck to continue looking at life under a magnifying glass. To say more would be bad luck. I’m on my way to present the film in Orlando and in my new home, New York! 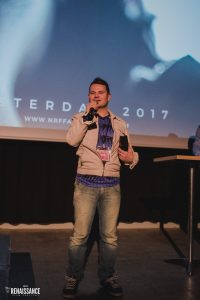