Christina loses her friends in the forest. Whilst looking for them, she stumbles across the bodies of three children beside a lake. Are they dead or is Christina…?

Born in Rufino, Argentina, LUZ OLIVARES CAPELLE studied Film in Buenos Aires, E.N.E.R.C, before moving to Austria, where she obtained a Master’s degree in film directing at Vienna University of Music and Performing Arts.

FOREST OF ECHOES is  Luz’ graduation film and premiered at the Karlovy Vary International Film Festival. It went on to win Awards for Best Narrative Short at Diagonale Festival of Austrian Film and at the Vienna Independent Shorts Film Festival, as well as the prestigious Thomas Pluch Screenplay Award.

Luz’ films have also been screened in several art galleries and museums including the Museum of the Moving Image, M.A.L.B.A., among others. 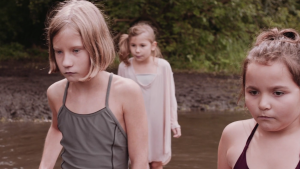