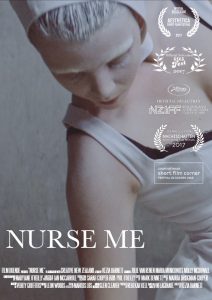 Emerging from the sea’s dark folds, three lone figures are reborn into a post-apocalyptic world. The nurses – bearers of solace, fetish and sexual power – have been drawn back to the centre, the vortex, to where it all began.

Based on the dance ‘Nurses’ from MaryJane & Phil O’Reilly’s stage production In Flagrante.

Kezia Barnett is an accomplished filmmaker, director, and artist. Her short films have been shown in festivals around the world, and her music videos and international commercials have received numerous accolades.

Rebekah Kelly is a producer  for films and TV commercials. She has produced a number of shorts, including Cold Snap, which premiered at Venice Orrizonti. She has an MA in film from Goldsmiths College, London.

MaryJane O’Reilly has had a forty-five year career in ballet, contemporary dance and choreography. She is currently the director / choreographer of her neo burlesque company In Flagrante.