The music video directed by Craig Murray guides the viewer into a dark Sci-Fi world filled with subconscious archetypes and psychedelic images that immerses the viewer into the subtle psychological aspects of the piece’s concept.

Part 1 is a lush and beautiful piece, unique in its use of the orchestra against synths, vocals and ambience. Drawing on the influence of late romantic and neo-romantic composers alongside psychedelic, progressive and post-rock influences, the movement is a fascinating fusion of orchestral writing and post-rock tendencies. 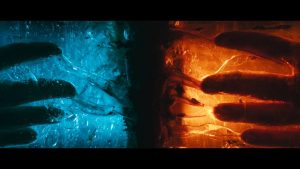 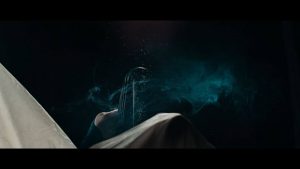 Part 2 “The Descent” portrays the psychological descent into hell that is experienced when one is cut off from a fixated object of love. The consistent, dissonant, droning waves of “The Descent” are designed to cut into the listener psychologically and voice the sense of persistent darkness that abounds in the experience of despair once the terror of heartbreak sets in. 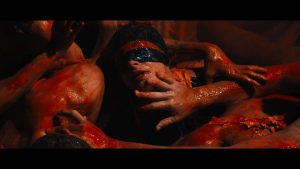 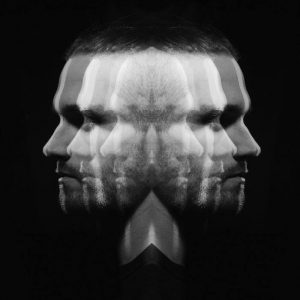 Ghost Against Ghost is the post-everything electronic-rock concept and moniker of producer/composer Christopher Bono founded in 2008, after he began work on an as yet unfinished two-hour concept album that he envisioned in a dream one night in Brooklyn.

To bring the vision to life, Bono assembled a group of electro-acoustic musicians and began performing in New York City & Brooklyn. Their long, multi-media shows alternated with open noise, electronic and ambient improvisations.

As Bono began preparations for the first Ghost Against Ghost album in 2008, he became increasingly unsatisfied with the infant sound of Ghost Against Ghost. This led him to unexpectedly study classical music at the late and unusual age of 27 in search of answers.

“I could see the sounds, like a massive and extraordinarily complex piece of architecture, or some sort of alien, psychic sculpture, but I did not know how to realize it technically. … Until I heard Stravinsky.” -Bono

Under the tutelage of classical composers such as Stravinsky and Bach and various contemporary composers, Bono began to find answers to the riddle of the Ghost Against Ghost sound. 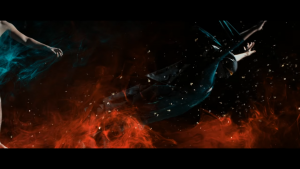 Over the course of 5 years, Bono released two full classical albums and an EP to critical acclaim. Bono had discovered the melodic and rhythmic movement, structure and development he needed to understand to implement Ghost Against Ghost in a current context; the result is an interwoven, wild, sonic tapestry, fused by his knowledge of modern studio production, mixing, engineering and electronics.

The first full length Ghost Against Ghost album, Still Love has been released over several months, beginning with the release of the first still love EP in November of 2015. Look out for the upcoming tour of Ghost Against Ghost, which will feature several live musicians alongside Bono on vocals, guitars, keyboards and electronics.

This biog is taken from the artist’s website. No copyright infringement intended.

Enter your Film or Script into NRFF Amsterdam today!