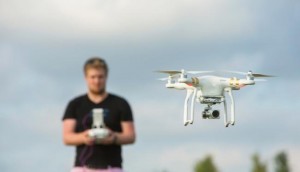 In this blog, film festival director and filmmaker Jan Hendrik Verstraten, discusses how and when to use a drone while making a low budget short.

Indie filmmaker Shawn Welling’s talk on ‘Drones for indie filmmakers’, was one of the lectures I’m happy I had a chance to attend in Houston during WorldFest.

Although I knew already that drones were used by a lot of filmmakers, I didn’t realise they are really affordable (you can get one already for less than $1000), a lot of fun, and relatively easy to use. Shawn started his lecture with showing us his youtube video IF I COULD TALK (See below). It’s a heartwarming video, especially for dog lovers, and it gives a good example of how drones can add excitement and deliver high production value to your low budget film. Shawn’s opening shot is made with a drone, and it’s a great start.

Drones are Unmanned Aircraft Systems (UAS), which can fly from very low to as high as 400m! They can create incredible dramatic panorama views, add tension and high speed action to a scene while chasing a vehicle or person, and they can also go where it is too dangerous or too expensive to film with a helicopter, like above the crater of a vulcano, or in war zone areas. It is no wonder they are rapidly growing in popularity among many indie filmmakers, but especially among those who make documentaries.

BE PREPARED FOR THE UNEXPECTED

There are a few things you will have to keep in mind though when you want to create these panoramic shots. You cannot fly drones everywhere, and you will have to check the safety rules and regulations from the area where you live.
You will also have to remember that a lot can go wrong when you are inexperienced, or when you ignore adverse weather conditions, like a strong wind or rain. Drones can crash, fly into a wall, a tree or electric wires. They can upset people who don’t want to be filmed or have them around, and very often drones are not allowed near congested areas or people. This is good because they can be dangerous!
Therefore to be safe it is important that you practice a lot, know what you are doing, or, even better, work with an experienced ‘pilot’ for your film. Something Shawn did as well. It does make sense.

To have a glimpse what can go wrong, watch the video below!

ADAPT YOUR SOUND AND EDITING

Drones are noisy especially when nearby and they do not record sound. In case you want to record sound at the same time and have the drone not too far away from where you are, you will have to work with an external recording device, and even then you will have to remove the noise of the drone in post production. With Adobe for instance you can eliminate a certain sound pattern.

It is also good to realise that even though you can create high quality images, the camera attached to the drone does not allow for a fixed lens and the depth of field may be different than the lens that you use during the rest of your video. This does not have to be a problem, but it is good to be aware of this while editing.

REMEMBER, IT’S ABOUT THE STORY AND NOT ABOUT THE EQUIPMENT

It is good to remember that a good film is not good because you have a dramatic panoramic shot in it. A good film is good because the story is good. A drone can give you that extra bit of excitement, production value, and a good way to create an establishment shot or transition, but in the end it is the story and the characters that count the most. Never forget that! Happy Filmmaking!

The New Renaissance Film Festival, AMSTERDAM, is a showcase stage for innovative filmmakers and screenwriters from the Netherlands and worldwide. Don’t miss our regular deadline for submissions. Sign up to our MAILING LIST for the latest news and special offers!