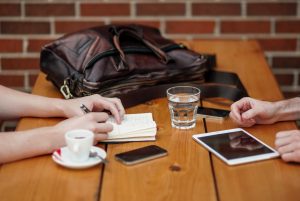 Smart networking is key to a filmmaker’s success, and pitching – the art of summarizing your story idea in a few sexy sentences – is at the heart of it. Coming from her own experience with extensive pitching training and participating in international pitching competitions, Marta Parlatore lead this hands-on, action-filled masterclass where she helped New Renaissance filmmakers and screenwriters find the answer to their most-feared question – So, what is your project about? 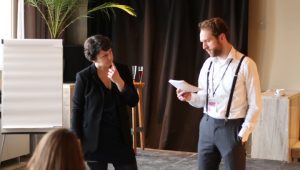 Marta started her masterclass by pointing out that the process of preparing a good pitch in itself can also be used as tool to analyse your own work, to understand it, and to make it better. You may think your film or screenplay, is all clear to you, but the moment you have to explain it in a few sentences, you may suddenly find it hard to do this. Pitching should be part of the writing process. All the time ask yourself these questions: What is about? What is the heart of the story? What drives the main character?

Marta compared a pitch to a spoken trailer with you as the performer. This is a great analogy. Because a good trailer seduces you and raises your curiosity while at the same time giving you information about the essence of the story. A good pitch should draw the audience in, get it involved, and interested.

Pitching takes place in organised pitch meetings between industry professionals of 15-20 minutes long, but there are numerous of informal pitching opportunities that happen by chance. That’s why it is important to have prepared an elevator pitch of 1 minute long, and a cocktail pitch of 2-3 minutes for each project that you want to move forward.

2. Include the key elements in your pitch

A good pitch needs to have the basic elements: Is this a short or a feature? A TV web series or a documentary? What kind of genre? Is this an art-house film? The tone, and the setting. Where and When? A pitch will have to tell the story and give a broad outline. What is the heart of the story? It will need to show where the narrative tension lies. The hope and the fear. Where is your drive? What motivates the character(s)? 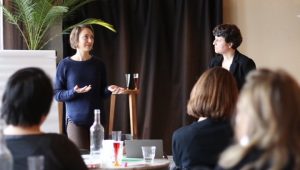 And like in a trailer for a film, some visuals need to be part of the pitch. They can be a detail that reveals the character or their situation. Like the green nail polish of the girl in The Big Lewoski, or the coffee stain on Emma Stone’s white dress before another unsuccessful audition.  A pitch should end with the theme of the story.

Write you pitch out on paper, stand in front of the mirror and read it out loud. Do the same with friends and get feedback. Then rewrite it, and go through it again. Provoke situations where you can practice. Talk about your project with anybody who will listen.

All in all not an easy task, but a great tool to improve your story, and to prepare yourself for that chance meeting with that producer who is looking for a new project! 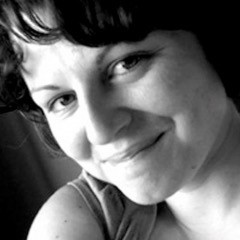 Marta Parlatore graduated from the Film Directing department of the Polish National Film School. She has written and directed several award-winning shorts and worked as a first Assistant Director on over 20 international film productions. She is an alumni of the Binger Screenwriter’s and Director’s Labs, the Script & Pitch development programme, the Torino Film Lab Framework, and was awarded a development grant from the prestigious Cinéfondation Résidence of the Cannes film festival.