Roxy is an aging prostitute, working in a lovemobile on the german-luxembourgish border. After being rescued from a brutal rape, she meets Jeff, a young man, whose presence and intentions are unclear to her… 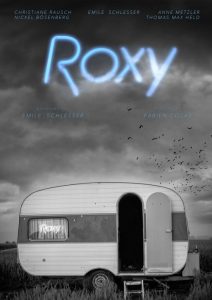 ROXY started as a small project between two filmmaker friends and cinephiles, Emile Schlesser, and Fabien Colas. It came together at the Cannes Film Festival in 2014, when they decided to make a short film based on an initial idea by Fabien about an ageing woman working as a prostitute in a so-called lovemobile, which one often sees when driving on German highways.

“We felt compelled to tell this particular story when there was a wave of violence in Germany against those prostitutes working in lovemobiles, and many unlucky women had their trailers set on fire.” Fabien Colas, DIRECTOR

After completing the script in a relatively short amount of time, Fabien and Emile decided, since they were both writer-directors, that one of them would  direct, while the other would star in the leading role, Jeff, and produce the project.

“Once we had found a wonderful actress, Christiane Rausch, who seemed absolutely perfect to portray the title role, we became so deeply obsessed with the story and the world in which it was set, that we completely fell in love with the main character Roxy.” Emile Schlesser, Writer/ Producer.

Due to a very short pre-production phase, it was practically impossible to fund the film on a larger scale, so Emile, being an artist and painter as well, decided he would finance the production through selling his paintings.

Emile Schlesser is the producer and editor of ROXY. He also starred in the protagonist’s role Jeff. Born and raised in Luxembourg, he now lives and works as an artist and filmmaker in Düsseldorf (Germany), where he studied at the renowned “Kunstakademie Düsseldorf”. Some of his former teachers include artists like Markus Lüpertz, Jörg Immendorff, Tal R and Marcel Odenbach. Delving deeply into the art of painting at first, he later switched to his childhood passion for making films. With ROXY he was able to combine both his passions by financing the short film production through selling his paintings.

Fabien Colas is the director of ROXY. Born and raised in Luxembourg, he discovered his passion for filmmaking early on in his life. This eventually lead to a degree in Film Studies at the University of Sussex before moving to London to start shooting commercials and short films. Fabien currently lives in Los Angeles where he’s completing an MA in Film at the prestigious Art Center College of Design, trying to sharpen his skills in narrative storytelling for films and commercials (see more at www.fabiencolas.com).