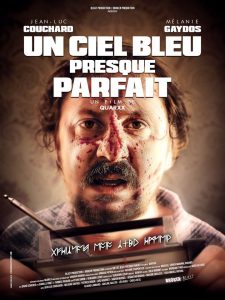 You might think that Simon lives a monotonous life. You would be wrong… Contrary to appearances, he does not live alone among the ruins of an old farm. Between kidnapper and guardian angel, he never takes his eyes off his roommate. Convinced of having contacts with beings from elsewhere, Simon is getting lost one step at a time while the border between reality and his nightmare is progressively fading away. 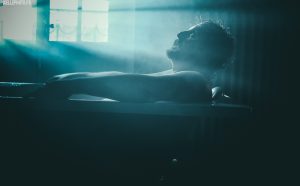 “I love the night – the dark, baroque, burlesque universe. My films have always been about those who live in the margins and the fools, the “crazy” ones who are always trying to do good, but never quite manage, caught up in their madness, sometimes burlesque and comic, sometimes desperate, sometimes destructive.

After ‘Nuit Noire’ [Black Night], which described a world that was much darker than my previous films, I wanted to write a true story, to focus my ideas to create a world that was unhinged, but anchored in reality, and characters that you could almost come across around your own house.

And so, ‘Un ciel bleu presque parfait’ is part of a certain continuity that includes my previous projects, but with a different look. It is referenced much less, even though it draws its influences from neighboring worlds, like those of Lynch or Cronenberg.”

Quarxx: an original, strange sounding pseudonym infused with the same mystery and ambiguity he carries.

Quarxx has already exhibited at several galleries in Paris, London, Shanghai, and Beijing. His films, like his paintings are splashes of color, a world full of totally disturbed characters.

Fantastic, excessive, even provocative, Quarxx’s universe is multifaceted, like himself. A true creator in the fullest sense of the word, he takes painstaking care with the image and the frame.

These qualities have already been seen in his previous short films, particularly in the Rasta-Kamikaze Bang-Bang, Dirty Maurice and Zéropolis trilogy, as well as in Nuit Noire [Black Night], which has made the rounds at numerous festivals (and brought home the Award for Best Achievement at the L.A. Indie Film Festival, among others). 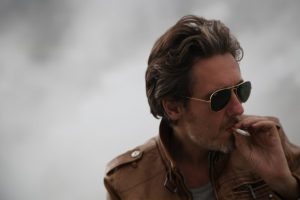